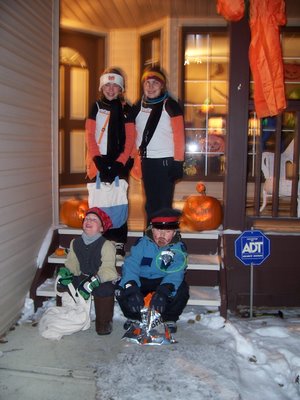 The kids were so exicted that they were invited to go trick or treating with Nicholas and Alexandra.
I was so excited because Nicholas’ & Alexandra’s daddy was taking them out treating. (Ron is on the road). Nicole and I stayed at her house to give out treats. But we didn’t eat anything. No we didn’t!
It was a very cold, windy and snowy Halloween. The kids came back with an impressive bundle of candy. I think people were giving out “more” candy than usual because the weather was so cold that the numbers of trick or treaters were down.
The kids are downstairs right now. I told them they could eat as much candy as they wanted for half an hour. And we will have supper an hour after that. (and if anybody throws up, that will be the end of that little experiment for future reference.)
I can hear them downstairs sorting, organizing, trading and bargaining. Serious stuff happening.