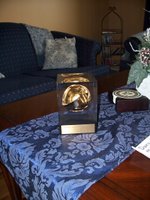 A few weeks ago, Ron attended National Meetings in Toronto for his company. An awards and recognition banquet was held on Wednesday evening, and to our surprise, Ron was awarded the “Globe & Spear” award, which is an award given as recognition of outstanding service to the company over the past year. The awards are made in the U.S. and are reportedly made by the same company that is commissioned to make the Academy Awards. The award is a globe made of gold leaf and suspended in glass, with name and date. That baby flew home in Ron’s briefcase. I call it his “Academy Award”. He is so self deprecating. “No where to go but down from here. I’ll have to start looking for a new job.” he says. He is so funny.