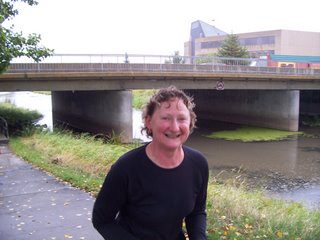 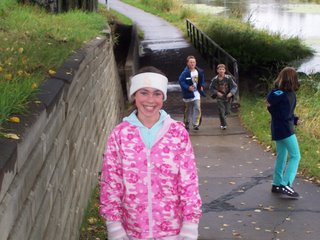 I remember the Fall that I started Grade 7 in 1980 was the summer that Terry Fox embarked on his run across Canada to raise funds for cancer research. His goal was simply to raise $1 for every person in Canada. I remember distinctly sitting in Mr. McKeil’s Social Studies class talking about the Terry Fox Run. Terry’s story did not have a happy ending, but his dream of raising money for cancer research has surpassed every expectation. His foundation has raised millions of dollars for cancer research. I love how every child in elementary school in Canada in 2006 knows who Terry Fox was. Many schools participate in a “Terry Fox” run or walk. Our school’s run this year was on a rainy and cold day, but that did not dampen our enthusiasm. I helped marshal the run for the older elementary kids. Tyler and I were fully decked out in our rain gear. Here is Hunter running for Terry! Here is Hunter’s teacher, Madame Juliette, who is back at school after a year of treatment for breast cancer. Great job Girls!