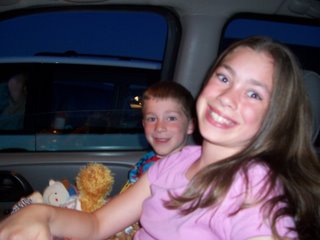 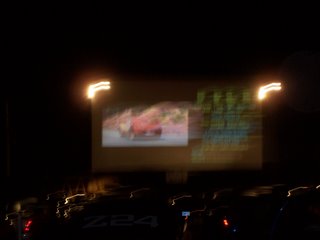 is what it costs to go to the DRIVE IN. Two feature movies.
The kids were absolutely bouncing off the walls when I announced to them that we were going to the Drive In. Tyler has never been to the Drive In before.
They got their pjs on and brought pillows and blankets. Snacks and drinks.
Cars and Pirates of the Carribean were the features. The screen lit up at 9:15 pm.
The place was absolutely PACKED!!!! There were not many parking spots when we arrived 35 minutes before screen time.
Even though we had lots of treats, Tyler kept asking me if we could get some “FRESH” popcorn.
I went off to the canteen and got each one a small popcorn.
We stayed until a little after midnight.
It was a great time, except for all the stuff we spilled in Grammie’s SUV.
First it was juice. Then Tyler managed to dump his ENTIRE bag of popcorn on the floor.
Then Grammie upset her can of 7 UP. Not to mention the party mix everywhere.
Shh! Don’t tell Grampie. I have to vacuum the car out!