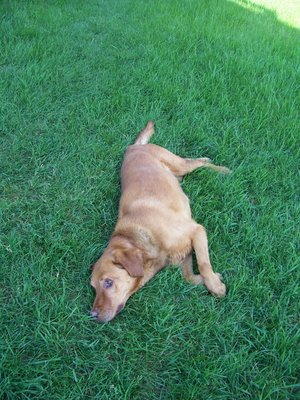 “A dog is the only thing on earth that loves you more than he loves himself.”

This dog has been a part of our life for 12 years.
We picked him out shortly after we moved into our first house and brought him home when he was only 7 weeks old.
We named him Brandy and he has made us laugh, cry, pull our hair out, and love him.
He has always been playful and extremely full of spunk.
He never did “settle down” and mellow out. We kept him anyway.
He was always just Brandy. He has chewed socks and underwear. Swam in pools, rivers, lakes and mud.
He has eaten chunks of our sofa set and torn wallpaper off the wall. Jumped off a truck and broke his pelvis.
But we have kept him through thick and thin. Better or worse.
But now we fear the end is near.
He had quite a spell today, which left him gasping for air and weak. He has layed around all afternoon since. He seems better but his breathing is still ragged.
We debate about taking him to a vet, but we don’t need a vet to charge hundreds of dollars to tell us what we already know.
He is old. He has had his day.
Brandy, you crazy old dog. I know it will soon be time for you to go.

But I will cry anyway.